In fact, the last time all the major domestic stock market indices (S&P 500; DJIA; Russell 2000; and Nasdaq) closed at all-time highs was way back in December 1999.

A natural response to all-time highs is a bit of fear about what might come next. You might think back to the Tech Crash and the Financial Crisis, both of which were preceded by all-time highs in the stock market. However, if we take a longer view on stock market history, the data is encouraging. 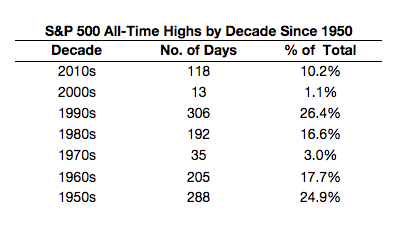 If we consider the cumulative record since 1950, almost 7% of all trading days since then have witnessed all-time highs being made. Clearly, some decades have been more favorable to investors than others, but that is the nature of market movements.

Next, let's assess how the stock market has performed in the periods following new all-time highs:

This is not any kind of prediction, of course. It's simply a reminder that all-time highs should be happening every so often. The decade of the 2000s was an aberration in that only 1.1% of its trading days saw all-time highs. In psychology, recency bias is the natural tendency of our brains to focus on recent results, rather than factoring in the longer-term scope of history. This post is one simple step toward helping your brain avoid that cognitive bias toward the recent past.

Inclusion of these indexes is for illustrative purposes only. Keep in mind that individuals cannot invest directly in any index, and index performance does not include transaction costs or other fees, which will affect actual investment performance. Individual investor's results will vary. Past performance does not guarantee future results.

The S&P 500 is an unmanaged index of 500 widely held stocks that is generally considered representative of the U.S. stock market.

The Dow Jones Industrial Average (DJIA), commonly known as "The Dow" is an index representing 30 stocks of companies maintained and revewied by the editors of The Wall Street Journal.