As I type this post, Bitcoin is trading at $6,279. For those just tuning in, that means it would take you more than $6,000 to buy one single Bitcoin (Bitcoin is an electronic version of currency). We wrote about Bitcoin here on the blog on January 31 of this year. At that time, Bitcoin had traded down from a peak of nearly $19,200 down to about $11,000.

If you had invested $19,000 to buy one Bitcoin on December 17th (when the search term peaked, which is also when the bulk of mainstream news articles on Bitcoin were being published), you would have just $6,279 today. That’s a reduction of nearly 67% of your capital in the span of less than 9 months.

It’s easy to see the strong correlation between mainstream awareness (as measured by Google Trends) and the price of Bitcoin. 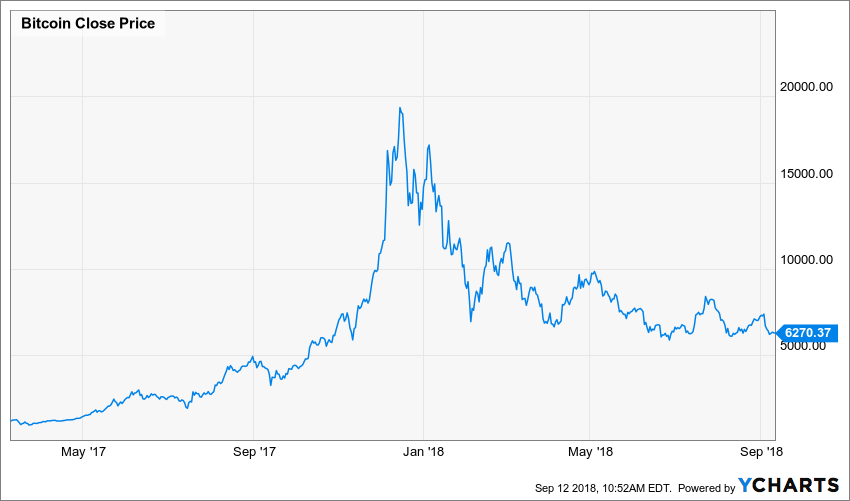 Now that’s a pretty high correlation between the two charts above.

This teaches an important lesson for avoiding bubbles, whether they be tulips or Bitcoins. If the trend has reached a feverish pitch in society, odds are you’re too late to the party. Further, even if you discover the trend earlier than the masses (as I did in buying my first – and only – Bitcoin in late 2013), it’s impossible to time your exit from the roller coaster.

Typically, human nature leads us to sell our winners too early and our losers too late (or never). My actions with Bitcoin demonstrated the former: I sold my Bitcoin after a tidy profit of 27.6%, less than a month after my initial purchase. But if I still held my Bitcoin today (fat chance), I would be sitting on nearly a 10x return on my investment (a ten-bagger, as some call them).

But could I have held my Bitcoin this long? Extremely unlikely. Let’s say I held the Bitcoin through all of 2014. In early 2015, Bitcoin traded down into the low $200s. Since I bought it for $642, I would have been staring at a 66% unrealized loss in the span of just over a year. Can you imagine explaining to my newly-married wife Krista (we were married in late 2013) that I lost over $400 “investing” in an electronic currency?

I don’t know what the future holds for Bitcoin, or for cryptocurrencies in general. I happen to like the idea of alternative forms of currency (is Big Brother out there reading this post?), but I don’t like the idea of speculating on this sort of thing with my hard-earned cash. Nor should you, dear reader.

The lesson, as it often is here at The Wealth Group: invest in broadly-diversified portfolios, and invest for the long-term.

The prominent underlying risk of using bitcoin as a medium of exchange is that it is not authorized or regulated by any central bank. Bitcoin issuers are not registered with the SEC, and the bitcoin marketplace is currently unregulated. Bitcoin and other cryptocurrencies are a very speculative investment and involve a high degree of risk. Investors must have the financial ability, sophistication/experience and willingness to bear the risks of an investment, and a potential total loss of their investment. Securities that have been classified as Bitcoin-related cannot be purchased or deposited in Raymond James client accounts.