Quiz question: when was the last time initial jobless claims were as low in the U.S. as they are today?

Think of that: by this metric, it’s been nearly 50 years since the U.S. labor market was this strong. The headline unemployment rate has been steady for a few months at 4.1%.

The initial jobless claims report is released weekly by the U.S. Department of Labor. “This report measures the number of jobless claims filed by individuals seeking to receive jobless benefits.” The latest reading came in at 210,000: 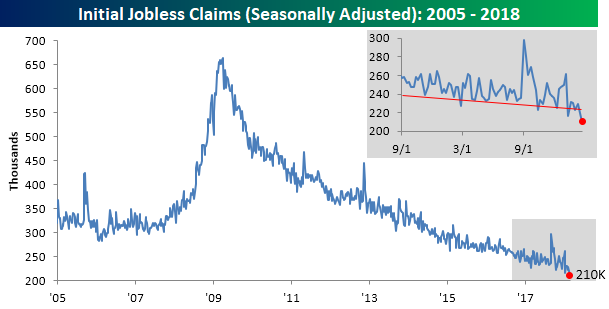 Why does this matter to you? The trend of initial claims for unemployment has historically correlated strongly with the strength of the U.S. economy. In past U.S. recessions, one of the indicators of recession has been a surge in initial jobless claims.

Stated simply: when initial claims for unemployment benefits are going down (as they are now), it’s a good sign for continued economic growth. And when economic growth is strong, that typically translates to a healthy stock market.