Most of us have said or thought something like: “If only I had invested in __________, I would have so much money today.” Whether it’s the stock of Amazon, Google, Netflix, or Apple, the growth of these stocks over a long period of time is incredible. But when we examine the historical price movement of these stocks, we see that early investors have endured a bumpy ride.

My personal telling of this “what might have been” theme is Netflix stock. Through searching for  archived emails in my Gmail inbox, I learned that Netflix first shipped me a DVD (remember those?) back in September 2007. The company had been launched nearly 10 years before that, so I was hardly an early adopter to Netflix.

Netflix stock had its initial public offering on May 23rd, 2002. When adjusted for later stock splits, the closing price on that first day was $1.20 per share. Today, the stock trades at about $380. 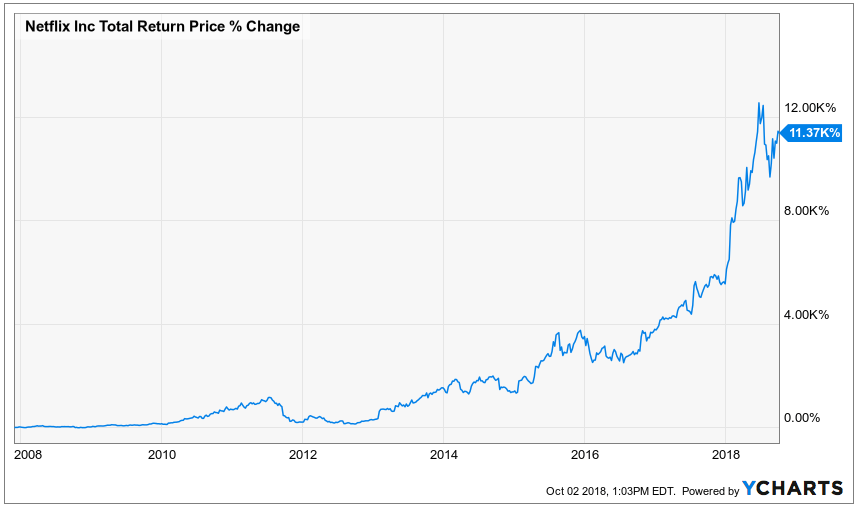 Netflix stock from November 2007 to today.

But even if I had the foresight and courage to invest $5,000 Netflix back then, would I have held the shares until today? A common mishap for individual stock investors is selling their winners too early and holding their losers too long. Netflix’s stock price history gives a great example of how this happens.

There have been some vicious drawdowns in NFLX stock over the years: 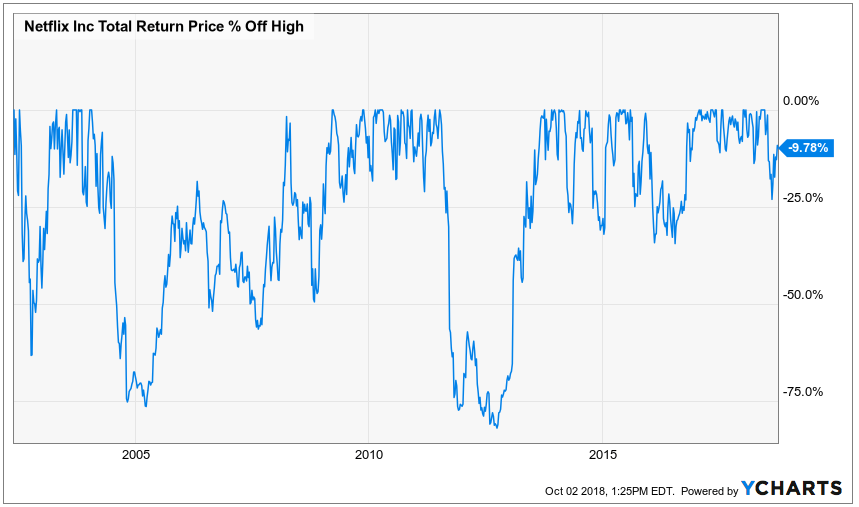 Yet, four days later, Netflix plummeted down to a split-adjusted price of $4.286, bringing my investment value down to less than $6,500. I would still have been up $1,500 in my investment, but I would have been kicking myself over having “lost” over $2,300 in the span of four days. 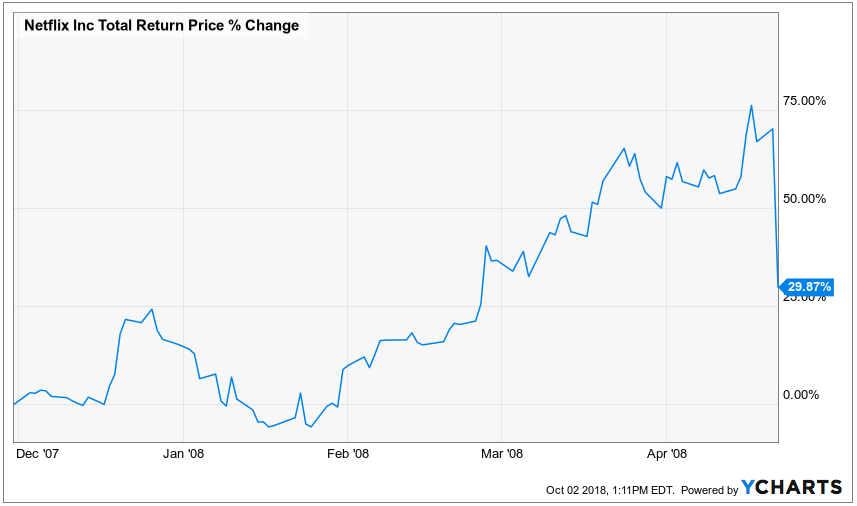 It would have been tempting to take my 30% profit and run — selling the winner too early. 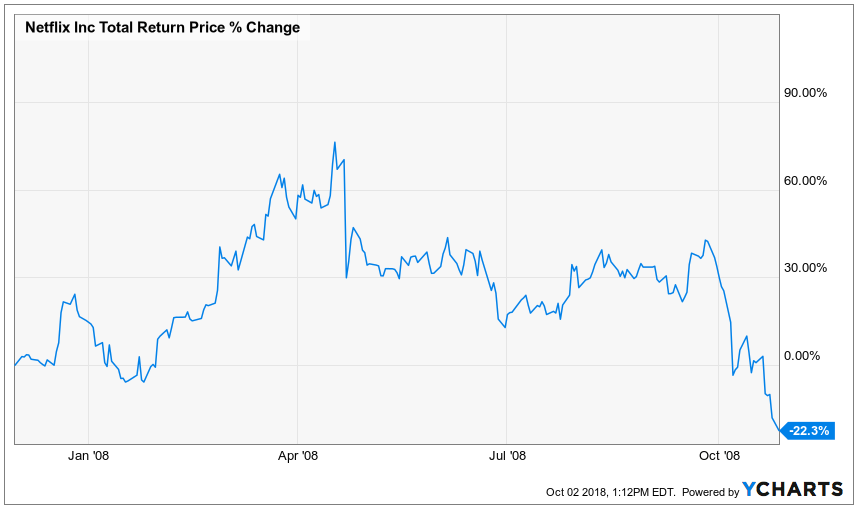 In October 2008, there was a lot of fear and panic in global stock markets. It would have been very easy for me to wimp out and sell my Netflix stock. Cut my losses and moved on.

We’ll give Historical Mike some credit and assume he gritted his teeth and held the Netflix stock. 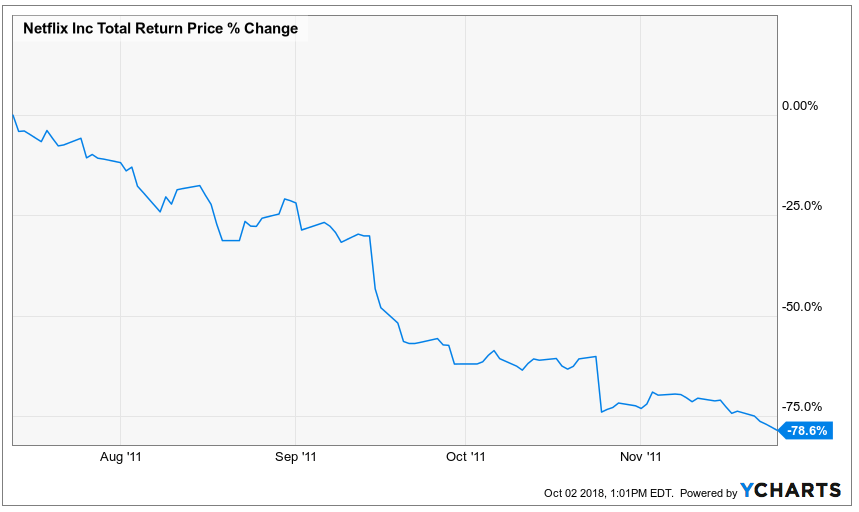 Would I still have held the stock? It’s easy to say “yes, of course” in hindsight, but it would have been remarkably challenging in the moment.

In behavioral finance, the term “hindsight bias” is used to explain this phenomenon, which some call the “knew-it-all-along effect.” After an event occurs (e.g. Netflix stock shooting to the moon), we think that event would have been easy to predict all along. 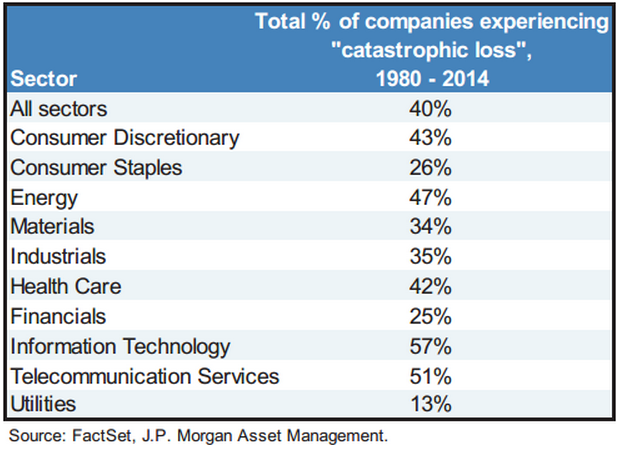 During the period studied in this chart, nearly 60% of technology companies had a catastrophic loss…and never really recovered. What if Netflix had been one of those companies? Not only would my initial investment be worth a pittance today, but that $5,000 of capital could have been invested in a broadly-diversified portfolio for all those years. So there’s an opportunity cost to deploying capital in an individual stock.

When someone buys individual stocks, they typically don’t buy just one. They don’t put all their eggs in one basket (which is wise). Over time, they might accumulate a portfolio of several individual stocks, purchased either based on the fundamentals, hunches, or both. Well, some of those stocks might hit big like Netflix. But some might be in companies like Blockbuster. We don’t know in advance which companies will be the winners and the losers. 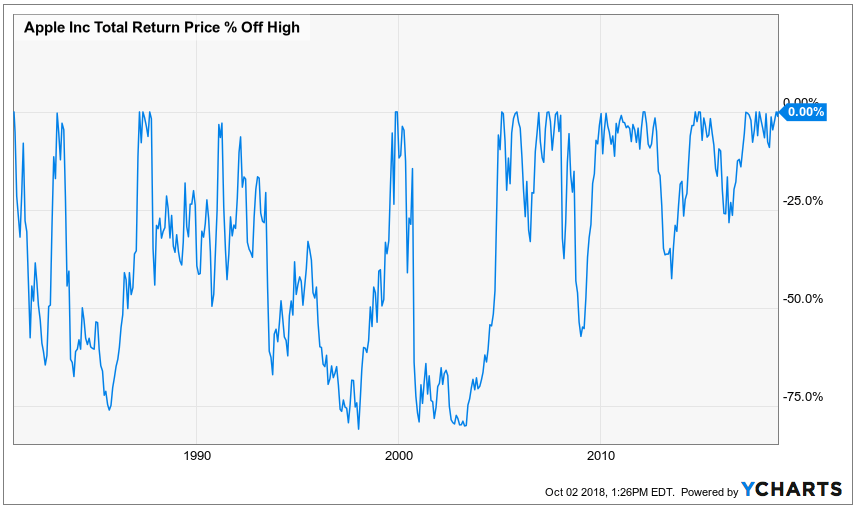 Some very challenging times as an Apple investor over the years.

Investing in individual stocks does offer the potential of higher returns. But what are the chances? And what are the opportunity costs of doing so? And how will you know when to finally sell?