The Wealth Group exists to help our clients make better decisions with their money. Our clients' financial behaviors should look different from their neighbors. Making better decisions around money leads to greater success with money; ergo, wealth is built. Building wealth is not magic; it's not the result of cosmic forces. It's a known formula, consistently followed over a long period of time.

Every year since 2000, Vanguard releases a report called How America Saves. The 2016 report was released last summer; it is 110 pages and chock-full of fascinating data. Well, fascinating to nerds like us.

Vanguard now has recordkeeping statistics for 4,400,000 participant accounts in defined-contribution plans (e.g. 401(k) accounts). So, it's a great sample size to represent how ordinary Americans are saving for retirement.

Here are just a handful of the interesting facts unearthed in Vanguard's report: 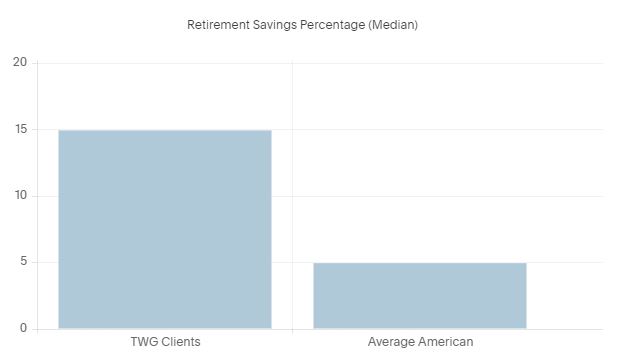 What does this mean to you, our client?

If you are already saving 15% or more of your income toward retirement, congratulations. You are crushing it.

If you are below the 15% retirement savings clip, let's talk about how we can make the next step. The next step could be as simple as a 2% increase in your savings rate. Or, maybe we need to pull the training wheels off and dive in to a 15% savings rate.