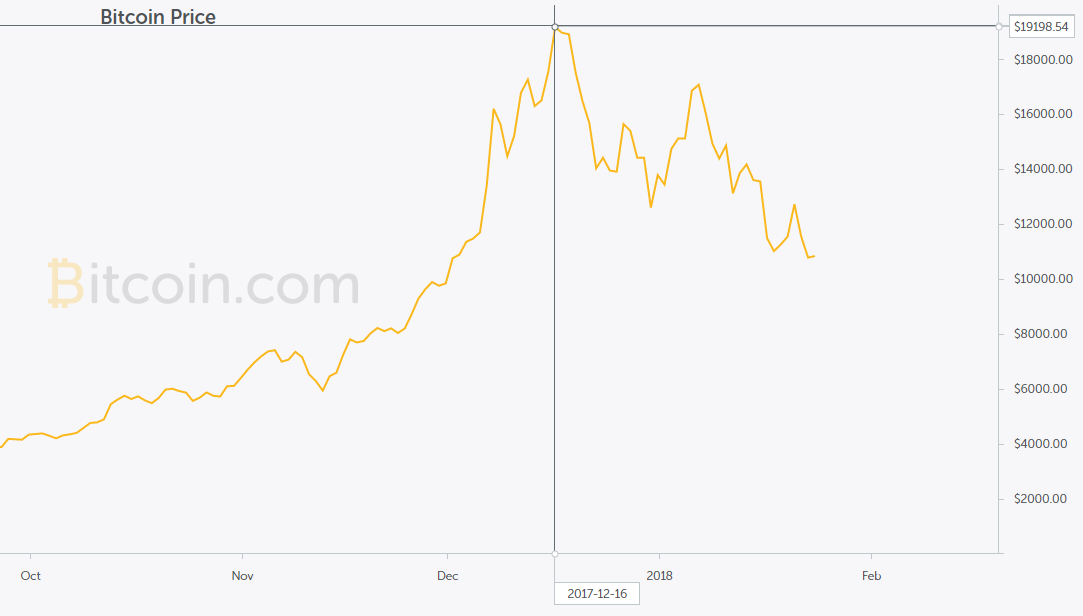 Bitcoin is simply an alternate currency. You can buy and sell Bitcoin on numerous online exchanges. Like the US dollar, it is a medium of exchange for transactions. Unlike the US dollar, there are currently a very small number of retailers that accept Bitcoin as a form of payment.

By mid-December, it became difficult not to be aware of Bitcoin. There were plenty of media stories about it. Your cousin was “day-trading” cryptocurrencies. You heard about friends of friends “getting rich” off Bitcoin and other cryptocurrencies.

I wonder where all those day-traders are right now.

It’s funny how human psychology works with manias: we see the “hot” new investment shooting to the moon, and we start to think it would be great to get a piece of the action. For any person that was interested in buying Bitcoin in mid-December for nearly $20,000 per Bitcoin, they should be ecstatic to see Bitcoins go “on sale” for 40% off.

But of course, we know that’s not how manias work. People only want to get on board when the ship is sailing smoothly.

Before you label me a Bitcoin-hater, allow me to confess that I purchased one Bitcoin of my very own back on December 30, 2013. I paid $642 for my slice of the Bitcoin action. Can you imagine my wife’s reaction when I told her I invested speculated with $640 on an electronic currency?

Fortunately for me and my wife, I sold my one Bitcoin for $819 on January 22, 2014 – less than 30 days after initially purchasing it. My profit was a handsome total return of 27.6%, net of expenses. It was a fun little experiment, but it was also challenging.

It was challenging for me because it was speculation. When you speculate with something like Bitcoin, you have no idea what the intrinsic (or fair) value is. Bitcoin has no earnings. Bitcoin has no dividend. Bitcoin can’t be used at the grocery store (though someday, it could be).

There are other serious reasons to be skeptical about Bitcoin. In an excellent article in The Wall Street Journal titled “Hooray for Bitcoin (but Don’t Buy It)”, Duke University law professor Lawrence Baxter shared some excellent reasons to bet against Bitcoin. The two that hit home most for me is that it’s far too volatile to be considered a reliable store of value, and that politicians are going to want a piece of the pie…or shut down cryptocurrencies altogether.

When you own shares in a publicly-traded company, you can see the historical earnings stream of the company. Earnings are profits. When a company has profits, two things happen:

That is stock investing, in a nutshell.

On a personal level, I like the idea of cryptocurrencies. With governments around the world continuing to saddle their citizens with unprecedented debt burdens (see here), it’s a natural reaction for people around the world to look to alternate methods for storing their wealth. But here’s the rub: how much of the price increase in Bitcoin is due to people wanting to buy-and-hold it as a store of wealth, vs. how much of the price increase is fueled by speculators looking to turn a quick profit?

Prior to making an investment decision, please consult with your financial advisor about your individual situation .The prominent underlying risk of using bitcoin as a medium of exchange is that it is not authorized or regulated by any central bank. Bitcoin issuers are not registered with the SEC, and the bitcoin marketplace is currently unregulated. Bitcoin and other cryptocurrencies are a very speculative investment and involve a high degree of risk. Investors must have the financial ability, sophistication/experience and willingness to bear the risks of an investment, and a potential total loss of their investment. Securities that have been classified as Bitcoin-related cannot be purchased or deposited in Raymond James client accounts.